Great value for money, super practical, and well-equipped as standard, the Škoda Fabia is one of the best superminis available

The small Škoda is well-made and good value used, and it puts up a good argument as one of the best superminis on the market.

The driving experience is still better than other much more recent cars from the opposition, and there are engine choices to suit every need and pocket.

That Tardis-like exterior is a lot bigger than some competitors, and economy is right up with the best of them.

Petrol engines in the third generation model, which was introduced in 2014, were at first 1.2-litre with normally aspirated 60bhp and turbocharged 95bhp or 105bhp.

The lowliest 60bhp models are very slow, but they're also economical and cheap to insure. They're capable of around 50mpg, but take around 15 seconds to accelerate from 0 to 60mph.

The others have fair to good performance, while still managing very good economy. The 90bhp model reaches 60mph in 10.6 seconds and can do about 55mpg, while the 105bhp covers the sprint in 9.4 seconds and is capable of 56mpg.

The 60bhp model, as I said above, is very slow but economical, and the 95bhp and 110bhp versions have about the same performance and economy as the 1.2-litre engines above.

Whatever the engine, the Fabia is close to being the best small car you can buy, and it's also available as an estate – a model that's not part of most manufacturers’ ranges.

Comfort is excellent over all surfaces by any standards, easily eclipsing cars in the family class above, and this makes it a very special and unusual small car – one to downsize to without any loss.
Peter Hayward

With such forgiving suspension, many would expect some effect on the handing, but amazingly, there's none.

The road-holding is fantastic, and the level of grip tremendous, even though there's a fair amount of roll.

It takes speed humps with ease and a tight turning circle with short length make it very easy to park.

Škoda are part of the Volkswagen group, so VW's marvellously tactile and informative power steering was used on the Fabia, and that only adds to the great feel of the whole car.

The hatch is one of the biggest in the class and, although the dash is quite plain, everything works well and build quality is right up with the best.

Seats and adjustment are excellent and equipment is good in all. Even base S models have folding rear seats, electric front windows and central locking, steering wheel reach and height, traction control, and a height adjustable driver’s seat.

Find your Škoda Fabia your way with CarStore

The Škoda Fabia is a supermini like no other due to its super spacious and practical interior, and good level of equipment as standard. For a car that's so cheap to buy, many would expect the Fabia to underperform compared to rivals, but in fact, it often exceeds all expectations and is great value for money on the used market. 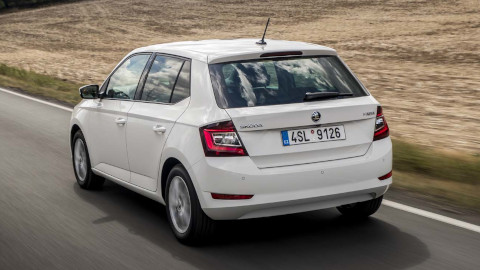